Electrical Transmission in Multiple Coordinate Systems by Eric Dollard – This is the sequel to The Extraluminal Transmission Systems of Tesla and Alexanderson. This is the deepest Eric Dollard has ever gone to develop the theoretical basis for longitudinal propagation, which is not subject to the inverse square law. There is also no velocity to its propagation and therefore no association to light speed. If you ever saw the classic Borderland videos on Tesla’s Longitudinal Waves, this presents diagrams, math and more information that you can ever hope for if you want to experiment with the analog Longitudinal networks on your own! Release date – August 15, 2016. Learn more: Electrical Transmission in Multiple Coordinate Systems

Here is a video presentation of Eric Dollard showing his recent bench experiments with analog networks that demonstrate both transverse and longitudinal propagation. When used together, time is cancelled out of the equation so that information can transmit from one end of the system to the other with no time delay. That isn’t faster than the speed of light, it is instantaneous or extraluminal.

To see the pictures that accompany this video presentation go here: https://ericpdollard.com/2016/01/09/transverse-longitudinal-analog-networks/ 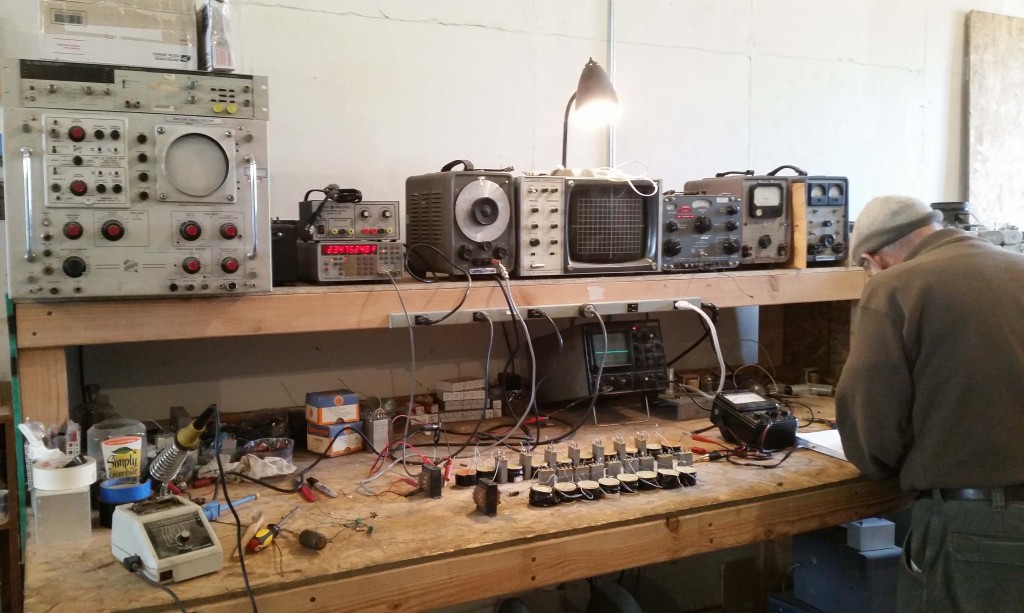 Here are photographs from a recent visit to EPD Laboratories, Inc. showing Eric Dollard working on some Transverse & Longitudinal Analog Networks, which cancel time out of the equation on transmission lines when used together. That means that signals can propagate from end of the transmission structure (lines) to another without any time delay. That isn’t faster than the speed of light since there is no velocity, it is instantaneous, which is extraluminal.

A new video walk through by Eric Dollard is coming soon that will explain what you see in the pictures below.

70% OF THE PROCEEDS FROM THE NEW PACKAGE PURCHASED WITH THE LINKS BELOW GO TO ERIC DOLLARD & EPD LABORATORIES, INC.

IT’S ONLY $7 SO GET A COPY TO HELP COVER ERIC’S TRAVEL COSTS TO DO THIS PRESENTATION!

Crystal Radios are free energy devices because they don’t need batteries. They are powered by the very AM radio waves that they’re tuned in to. This is a profound concept, but has its limitations because by the time the energy transmitted in those radio waves are received by the crystal radio, there isn’t much left. There is barely enough to just power the headset so you can listen to the station. Some people have lit LED lights with Crystal Radios but its not really anything to
write home about.

These AM radio waves are electromagnetic in nature and are known as Transverse Waves. These waves conform to the Inverse Square Law, which means that energy is diminished by the square of the distance. The further the waves are from the radio station, the less energy there is at the receiving end. So, if you wanted to power something significant at the receiving end, this is not the route you want to take.

Nikola Tesla figured out a more fruitful path many years ago and the concept is very simple. Every AM radio station not only transmits Transverse Waves through the air, it transmits Longitudinal Waves through the Earth! What is significant about this ground transmission is that it does not conform to the Inverse Square Law.

The energy between the AM station and the receiver for this ground transmission does not diminish by the square of the distance. That means that the energy in this ground
transmission has almost no loss between the transmitter and receiver. Therefore, if you wanted to power something significant from an AM transmission, this IS the route you want to take.

Get your copy now: http://www.emediapress.com/go.php?offer=epdollard&pid=61

In addition to the ground transmission being nearly lossless, it is also faster than the electromagnetic waves sent through the air. The electromagnetic waves are moving just about at light speed so if the longitudinal ground transmission gets to the receiving end faster, what does that tell you? It is not subject to light speed limitations. It is not faster than the speed of light, it is instantaneous for all practical purposes and is therefore Extraluminal.

To experience exactly what Tesla had his hands on, which obviously overturn the conventional apple cart, what you need is not just any Crystal Radio but a Tesla type Crystal Radio using a Tesla Resonant Transformer. It is similar to a regular Crystal Radio, but it does not have an antenna – that is all build into the coil and it connects to the Earth. It is also actually very simple in principle and you can figure out how to build your own real Tesla Resonant Transformer with nothing more than junior high school basic algebra.

Months ago, we gave out a free video presentation by Eric Dollard called the Crystal Radio Initiative along with a free 300 page book with all the notes, schematics and discussions on this open source project – that book and video are now part of a new package that has a brand new presentation.

Recently, Eric came to Spokane, Washington to work on some projects and to give a presentation teaching anyone how to calculate a real Tesla Resonant Transformer. And, you’re going to learn it by the most authoritative expert in the world on the subject. It can be used for this Tesla Crystal Radio project, a Cosmic Induction Generator (another one of Eric’s projects) or a multitude of other projects relating to the Tesla sciences. With one coil or a set of coils, you can do countless experiments just like what Eric has demonstrated over the last several decades.

Get your copy now: http://www.emediapress.com/go.php?offer=epdollard&pid=61

Only for those with a sense of humor… Now back to reality – https://emediapress.com

The presentations are available here: https://emediapress.com/shop/combo-electromagnetic-induction-propagation-method-symmetrical-co-ordinates-applied-solution-polyphase-networks/ Check out this brief video where Eric gives his own overview of the two new presentations: