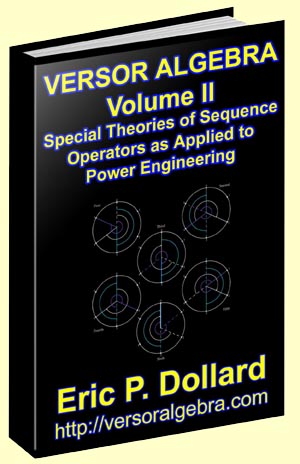 * NEW RELEASE * VERSOR ALGEBRA VOLUME II, SPECIAL THEORIES OF SEQUENCE OPERATORS AS APPLIED TO POWER ENGINEERING
If you have Volume I of Eric Dollard’s Versor Algebra book, you know that it is very important to the electric and musical sciences because it actually gives a theoretical basis for versor or sequencing algebra for the first time in mathematical history.

70% of the proceeds from the links below go to EPD Laboratories, Inc.

Volume II has been much anticipated and it is finally here! We now take the theory from the first Volume and actually apply it to any number of phases including the enigmatic monopolar or true single phase invented by Tesla for his telluric ground transmission system. It will also cover two phase, which most people erroneously refer to as single phase, which is the common electricity that is available in your home. There are other phases including eight phase, which is necessary for the analysis of polyphonic music such as Bach’s.

You will be able to observe the mathematical process without being sidetracked by numerous subscripts and the use of the same letter for a multiplicity of terms, which is the flaw in the available textbooks on the subject.

IntroducingLessons in Advanced PerceptionDeveloped by Harold Schroeppel Taught and mentored by former student Ruth Olmstead, PhD A course in expanding your awareness to perceive higher levels of consciousness and in […]